On March 2nd, I reported several security vulnerabilities to VMWare impacting their Identity Access Management (IAM) solution. In this blog post I will discuss some of the vulnerabilities I found, the motivation behind finding such vulnerabilities and how companies can protect themselves. The result of the research project concludes with a pre-authenticated remote root exploit chain nicknamed Hekate. The advisories and patches for these vulnerabilities can be found in the references section.

Single Sign On (SSO) has become the dominant authentication scheme to login to several related, yet independent, software systems. At the core of this are the identity providers (IdP). Their role is to perform credential verification and to supply a signed token containing assertions that a service providers (SP) can consume for access control. This is implemented using a protocol called Security Assertion Markup Language (SAML).

Whilst OAuth2 handles authorization (identity), and SAML handles authentication (access) a solution is needed to manage both since an organizations network perimeter can get very wide and complex. Therefore, a market for Identity and Access Management (IAM) solutions have become very popular in the enterprise environment to handle both use cases at scale.

This project was motivated by a high impact vulnerabilities affecting similar software products, let’s take a look in no particular order:

With most of this knowledge before I even started, I knew that vulnerabilities discovered in a system like this would have a high impact. So, at the time I asked myself: does a pre-authenticated remote code execution vulnerability/chain exist in this code base?

I had several challenges and I think it’s important to document them so that others are not discouraged when performing similar audits.

Let’s move on to discussing the vulnerabilities in depth.

The com.vmware.horizon.rest.controller.oauth2.OAuth2TokenResourceController class has two exposed endpoints. The first will generate an activation code for an existing oauth2 client:

The second will activate the device OAuth2 client by exchanging the activation code for a client ID and client secret:

This is enough for an attacker to then exchange the client_id and client_secret for an OAuth2 token to achieve a complete authentication bypass. Now, this wouldn’t have been so easily exploitable if no default OAuth2 clients were present, but as it turns out. There are two internal clients installed by default:

We can verify this when we check the database on the system:

At [1] the code calls createDefaultServiceOAuth2Client:

The code at [2] calls createSystemScopedServiceOAuth2Client which, as the name suggests creates a system scoped oauth2 client using the clientId “Service__OAuth2Client”. I actually found another authentication bypass documented as SRC-2022-0007 using variant analysis, however it impacts only the cloud environment due to the on-premise version not loading the authz Spring profile by default.

At [1] the code checks to see if there are any existing organizations (there will be if it’s set-up correctly) and at [2] the code validates that an admin is requesting the endpoint. At [3] the code calls DbConnectionCheckServiceImpl.checkConnection using the attacker controlled jdbcUrl.

The code calls DbConnectionCheckServiceImpl.testConnection at [4] with an attacker controlled jdbcUrl string.

The code calls FactoryHelper.getConnection at [5].

Finally, at [6] the attacker can reach a DriverManager.getConnection sink which will lead to an arbitrary JDBC URI connection. Given the flexibility of JDBC, the attacker can use any of the deployed drivers within the application. This vulnerability can lead to remote code execution as the horizon user which will be discussed in the exploitation section.

After gaining remote code execution as the horizon user, we can exploit the following vulnerability to gain root access. This section contains two bugs, but I decided to report it as a single vulnerability due to the way I (ab)used them in the final exploit chain.

From this point, exploitation is just the standard OAuth2 flow to grab a signed JWT.

It was also possible to perform remote code execution via the MySQL JDBC driver by using the autoDeserialize property. The server would connect back to the attacker’s malicious MySQL server where it could deliver an arbitrary serialized Java object that could be deserialized on the server. As it turns out, the off the shell ysoserial CommonsBeanutils1 gadget worked a treat: java -jar ysoserial-0.0.6-SNAPSHOT-all.jar CommonsBeanutils1 <cmd>.

This technique was first presented by Yang Zhang, Keyi Li, Yongtao Wang and Kunzhe Chai at Blackhat Europe in 2019. This was the technique I used in the exploit I sent to VMWare because I wanted to hint at their usage of unsafe libraries that contain off the shell gadget chains in them!

It was possible to perform remote code execution via the socketFactory property of the PostgreSQL JDBC driver. By setting the socketFactory and socketFactoryArg properties, an attacker can trigger the execution of a constructor defined in an arbitrary Java class with a controlled string argument. Since the application was using Spring with a Postgres database, it was the perfect candidate to (ab)use FileSystemXmlApplicationContext!

But of course, we can improve on this. Inspired by RicterZ, let’s say you want to exploit the bug without internet access. You can re-use the com.vmware.licensecheck.LicenseChecker class VMWare provides us and mix deserialization with the PostgreSQL JDBC driver attack.

Let’s walk from one of the LicenseChecker constructors, right to the vulnerable sink.

At [3] the code base64 decodes the string and at [4] the code then calls deserialize:

At [6] the code will call decrypt, and decrypt the string using a hardcoded key. Then at [7] the code will call readObject on the attacker supplied string. At this point we could supply our deserialization gadget right into the jdbc uri string, removing any outgoing connection requirement! Here is a proof of concept to execute the command touch /tmp/pwn:

Note that your payload will need to double encode special characters. To generate the state string, I re-used VMWare’s classes: 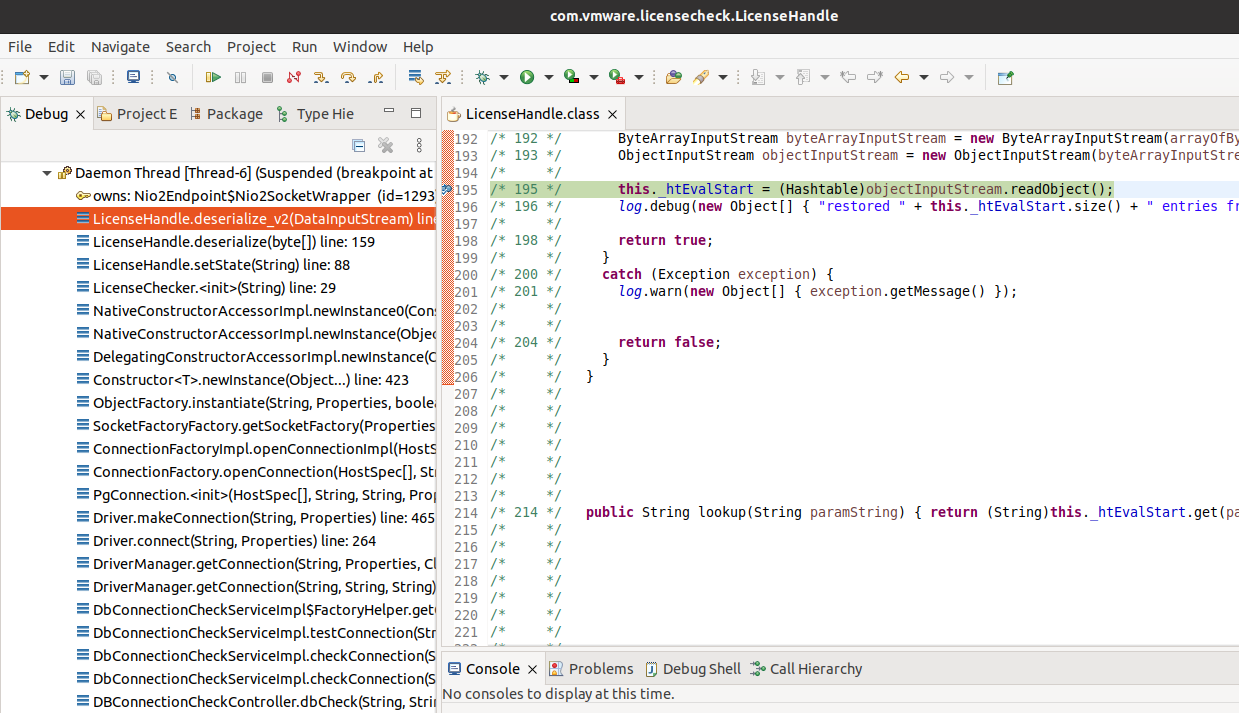 I have included the licensecheck-1.1.5.jar library in the exploit directory so that the exploit can be re-built and replicated. It should be noted that the first connection to a PostgreSQL database doesn’t need to be established for the attack to succeed so an invalid host/port is perfectly fine. Details about this attack and others similar to it can be found in the excellent blog post by Xu Yuanzhen.

The final point I will make about this is that the LicenseChecker class could have also been used to exploit CVE-2021-21985 since the licensecheck-1.1.5.jar library was loaded into the target vCenter process coupled with publicly available gadget chains.

This exploit was straight forward and involved overwriting the permissions of the certproxyService.sh script so that it can be modified by the horizon user.

The third exploit leverages the PostgreSQL JDBC driver again, this time re-using the com.vmware.licensecheck.* classes and avoids any outbound network connections to the attacker. This is the exploit that was demonstrated at Black Hat USA 2022.

All three exploits can be downloaded here: https://github.com/sourceincite/hekate/.

All the vulnerabilities used in Hekate also impacted the cloud version of the VMWare Workspace ONE Access in its default configuration.

Using a quick favicon hash search, Shodan reveals ~700 active hosts were vulnerable at the time of discovery. Although the exposure is limited, the systems impacted are highly critical. An attacker will be able to gain access to third party systems, grant assertions and breach the perimeter of an enterprise network all of which can’t be done with your run-of-the-mill exposed IoT device.

The limitations of CVE-2020-4006 was that it required authentication and it was targeting port 8443. In comparison, this attack chain targets port 443 which is much more likely exposed externally. Additionally, no authentication was required all whilst achieving root access making it quite disastrous and results in the complete compromise of the affected appliance. Finally, it can be exploited in a variety of ways such as client-side or server-side without the requirement of a deserialization gadget.